“Hungary is One of Israel’s Strongest Friends in Europe Today” 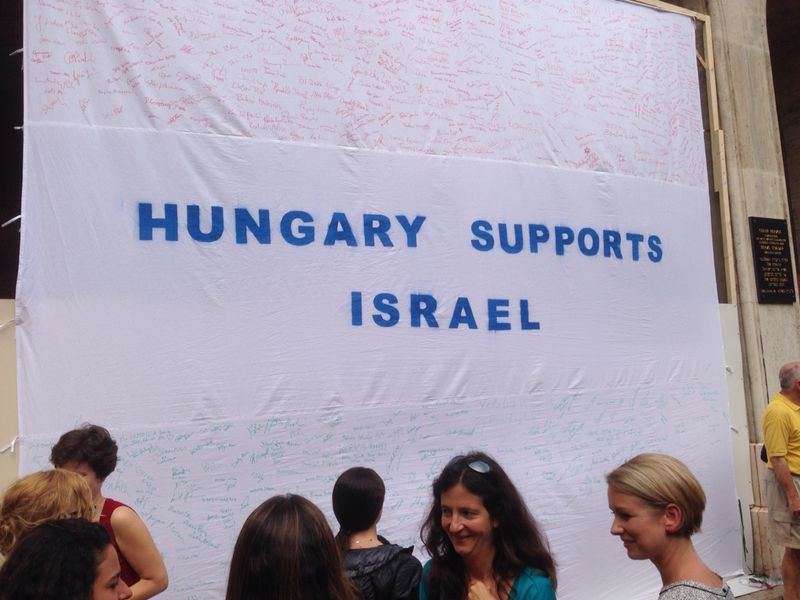 How do you view the situation of the Hungarian Jewry in general?

Hungary has the largest Jewish community in Central Eastern Europe, and it shows. Anyone who visits Hungary can witness a blooming, flourishing Jewish life, with rich festivals, lively cultural events, active social participation. The tragedies of World War II did not abolish Jewish life here and we at AJC Central Europe are beyond excited to work with the community here. I have been tasked to represent the AJC Central Europe office in Budapest a few months ago and we are working hard to reach out to all communities, having built great working relationships with most of them already. We are constantly learning about the challenges and opportunities of Jewish life in Hungary, and we are hoping for an equal political and social recognition of those organizations whose task is to represent the local diaspora. Competing institutions within the Jewish world can be confusing for the society at large therefore we wish for mutual respect amongst them.

Europe has taken different tacks in the postwar era on hate speech and anti-Semitism, with some European countries, including Hungary making Holocaust denial illegal. And yet we are still seeing a rise of hate speech in many countries. What do you think about the virtues of this approach?

We believe the right to freedom of speech is one of the key civic liberties, but should not be abused by those who peddle poisonous lies like Holocaust denial. Therefore, AJC supports laws banning Holocaust denial and we also appreciate the 2010 law introduced in Hungary. However, contrary to other parts of the world, fortunately in our Central European societies we see very few examples of this phenomenon. The Holocaust happened so close in time and so close to our eyes, only extreme radicals dare to deny it. Our region has a problem more with honestly remembering our past, taking responsibility for the actions of our societies. We often see historians, academics, or decision makers trying to sway away from taking honest responsibility for the action of their societies during the Holocaust era. Holocaust distortion, outsourcing responsibility exclusively to Nazi Germany is still a problem in the Central European region, including in our country, that makes confronting our past difficult.

We are happy to see the great efforts of the Hungarian government to prevent Holocaust denial,

protecting the Jewish community by endorsing the Working Definition of Antisemitism adopted by the International Holocaust Remembrance Alliance. Words of the Hungarian Prime Minister announcing zero tolerance for antisemitism were also appreciated. These are encouraging steps, but we still see some troubling tendencies in remembering history honestly. The rehabilitation of Miklos Horthy, without asking the difficult questions, the monument to the victims of the German occupation in Budapest or the Sorsok Háza debate – these are all examples, that prove, Hungarian society still has some work to do if it wants to truly confront its responsibility during the Holocaust. It is always a difficult and uncomfortable process, we at AJC are here to assist.

Can we say that Jewish culture is experiencing a renaissance in Hungary today?

The Hungarian Jewish community is a prime example of the magical yearn for life in Jewish faith. As a Jewish young adult myself, it is extremely empowering for me to witness this revival in Budapest. Old synagogues being refurbished and opened for the public, exciting cultural events, and many communities for people to practice their faith and way of life. This is wonderful. Unfortunately, this past year, the pandemic made life really difficult for the community, mostly because a large sum of its income was lost, due to the cease of tourism. MAZSIHISZ – the associate partner of AJC in Hungary – continued working with Holocaust survivors and its elderly members, doing a heroic job trying to help those in need. We really hope, this renaissance can continue once the pandemic is over.

What do you think of the Hungarian government’s friendship with Israel?

Hungary is one of Israel’s strongest friends in Europe today, and we at American Jewish Committee continue to applaud that publicly. Prime Minister Viktor Orban often visits Israel, and we see that the government has a deep and nuanced understanding of not only the constant security threat Israel is facing, but also of the complicated historical and cultural context of the conflict. We were happy to learn of the opening of a diplomatic trade mission in Jerusalem. The Hungarian government is constantly standing up for Israel at the United Nations, the International Court of Justice, and the European Union, whenever Israel’s right to be judged by the same standards as other democracies is endangered. Just recently the Hungarian Foreign Minister Peter Szijjarto published one of the strongest statements standing with Israel regarding the latest conflict with Hamas. We appreciate that the government can and is willing to call terrorism by its name and we hope this friendship will continue to flourish.

Is there political anti-Semitism in Hungary?

I remember times when Members of Parliament were calling to list all Jews, when militant organizations were marching on the streets of Budapest. This has radically changed, and we don’t see acute political antisemitism in Hungary today. There are still however tendencies that are worrying, actions and comments by both government officials, members of the parliament on all sides, or public figures that can serve as a soil for antisemitism or contain antisemitic sentiment. We spoke of the rehabilitation of problematic historical figures, choosing role models that also had a history with antisemitism is concerning. We also often see relativization of the Holocaust by using it as an analogy for political purposes. Throwing around the word “Nazi”, or comparing our rivals to death camps is never acceptable. We can see that some levels of Hungarian society are still receptive to this hatred, and aggression against minority groups, and no political actors should be playing on those sentiments. We appreciate the change in the political milieu in Hungary regarding antisemitism and we know the Hungarian government has done a lot on that front. It is crucial however to continue on this road by eliminating anything that can serve antisemitic sentiment from public discourse. The Jewish community can be the only real partner in this process. For that, the government needs to give an equal attention to all groups representing the Jewish community, listening to all their concerns and not prioritize anyone in that discussion.