An Historic Journey – How We Brought Ukrainian Jewish Refugees to Israel 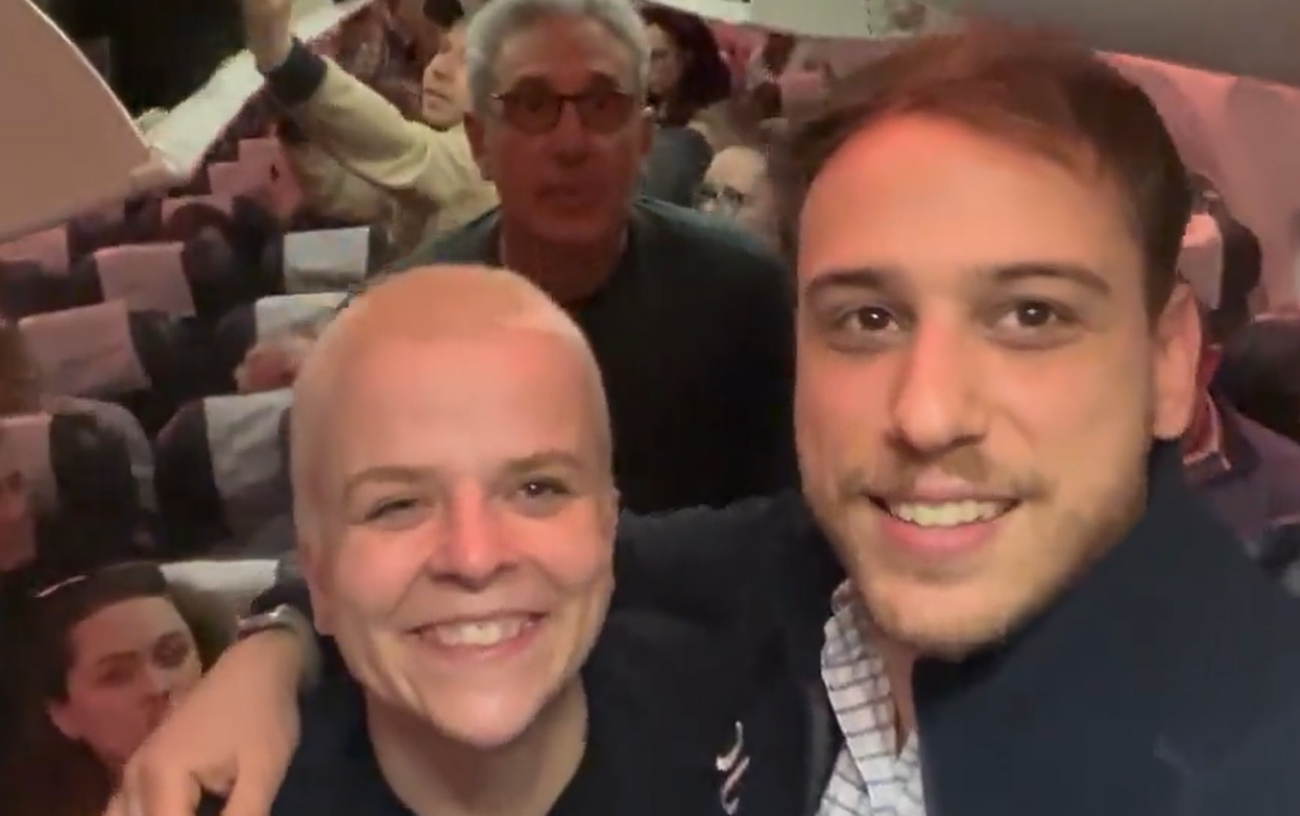 41st day of Russian invasion on Ukraine. Ongoing horror, trauma, brutality, and the worst nightmare of humanity coming to life. But this day was also the first day of a new life of 141 Ukrainian Jewish refugees who got on a flight from Budapest to Tel Aviv – sponsored by the American Jewish Committee (AJC) and organized by the Jewish Agency – to make aliyah. AJC Central Europe’s Aldona Zawada and Barnabas Turai accompanied them. This is their testimony.

This flight was not only a transfer from one country to another, but it can be understood as a metaphorical journey to a new home, a safe place, a holy land that embraces you while you make your first steps. It is thanks to the incredible and meaningful work of AJC, through its AJC #StandWithUkraineFund and the Jewish Agency that these 141 individuals were able to safely make it to Israel to begin their new life.

We connected with the group of refugees just before 4 pm of April 5th at a downtown hotel in Budapest, where we were awaited by three buses that took the group of refugees to the airport. They were people of all ages, elderly couples, mothers with children, young adults, teenagers. We heard mind devastating and heart-breaking stories of explosions, shootings, hunger, fear, and uncertainty. We saw and shared tears listening to people trying to explain to us what it feels like to leave everything you know and love behind. However, we also felt a fresh breeze of hope and saw a light in their eyes when we asked them about their new life in Israel unfolding soon.

We asked them what message they would like the world to hear about the war. Their reaction was very straightforward:

this is no longer Putin’s war but a war of Russians against humanity.

They wanted us to say in our documentary that the Russian army, young men who – without blinking an eye – kill, rape, destroy, disrespect, steal. They simply have no values that one would expect people to have in the 21st century. They wanted us to remember the Bucha massacre; people being killed in a park in the city center of Kharkiv; volunteer soldiers brutally shooting innocent victims in Mariupol – and in so many other towns, cities, villages.

The people we interviewed shared photos of their families with us, footage taken on their phones showing their neighborhoods turned into ashes by airstrikes. We heard stories of long train, car, bus journeys, sleeping in basements, having to abandon cars due to lack of petrol and to continue their flight from a war-torn country on foot.

This exceptional journey wouldn’t have happened without the staff of the Jewish Agency who organized the flight, and their volunteers who took care of the refugees with a great deal of empathy, love and dedication throughout their entire stay in Budapest. As they were assisting refugees to go on buses, we saw tears of joy in there eyes. They were emotional for having to part ways, yet they also knew they are sending these refugees off for a new beginning. They briefed us on how aliyah was made easier for these refugees due to the special war circumstances and what procedures they had to follow.

✈️This is them leaving for the airport.

History is happening in front of our eyes. pic.twitter.com/KwED6elDJW

As we arrived at the airport, the group had to wait in long lines for check-in and baggage drop-off, but we heard no voices of complaint. You could sense that though tired, people knew they are getting closer to their awaited arrival in Israel.

At the airport we spoke to a 21-year-old student from a town outside of Kiev who plans to enroll to a language course and perhaps join the Israeli military once she settles in. We spoke to an older gentleman and his wife who were soon to reunite with their daughter who has lived in Israel for four years. When asked about Israel, they said that they know a good life with good people awaits them.

We are proud and honored to have been given the opportunity to be on this flight, represent AJC, making sure all the passengers receive the best possible experience we could deliver to them, and see history unfolding with our own eyes. We would like to thank AJC Jerusalem Director, Avital Leibovich and her team for the incredible welcome once we landed in Israel. How wonderful for the passengers of the flight to experience such warmth. 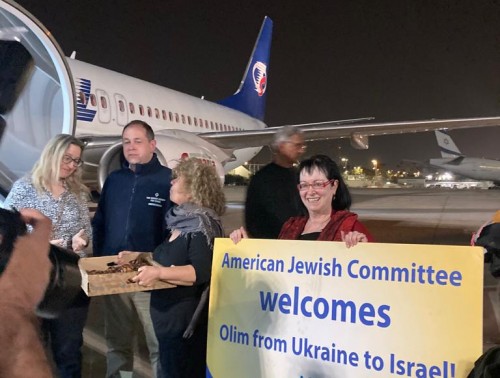 What have we learned on this incredible day? When running for your life, it is not the materialistic world you pay attention to. You think of your beloved ones, your pets, and whatever personal belongings you can carry that are essential to you. You leave your life, job, passion, hometowns with a broken soul but with faith that good will overcome evil at the end of the day. If you make it – you continue with hope. You follow your instincts and let yourself be guided by people of good will. The world has changed inevitably, we are broken and not even sure if it is possible to put the broken pieces back together. With the death of every innocent child, a part of the world dies, too. But as humans we really are indestructible, we adapt, we follow our hearts, and at the end of the day we keep breathing. We are thrilled to share with you that from now on 141 Ukrainian Jews who were on the AJC-sponsored flight, are breathing the precious air of Israel.