AJC Rerpresentative in Czechia: My friendship with Madeleine 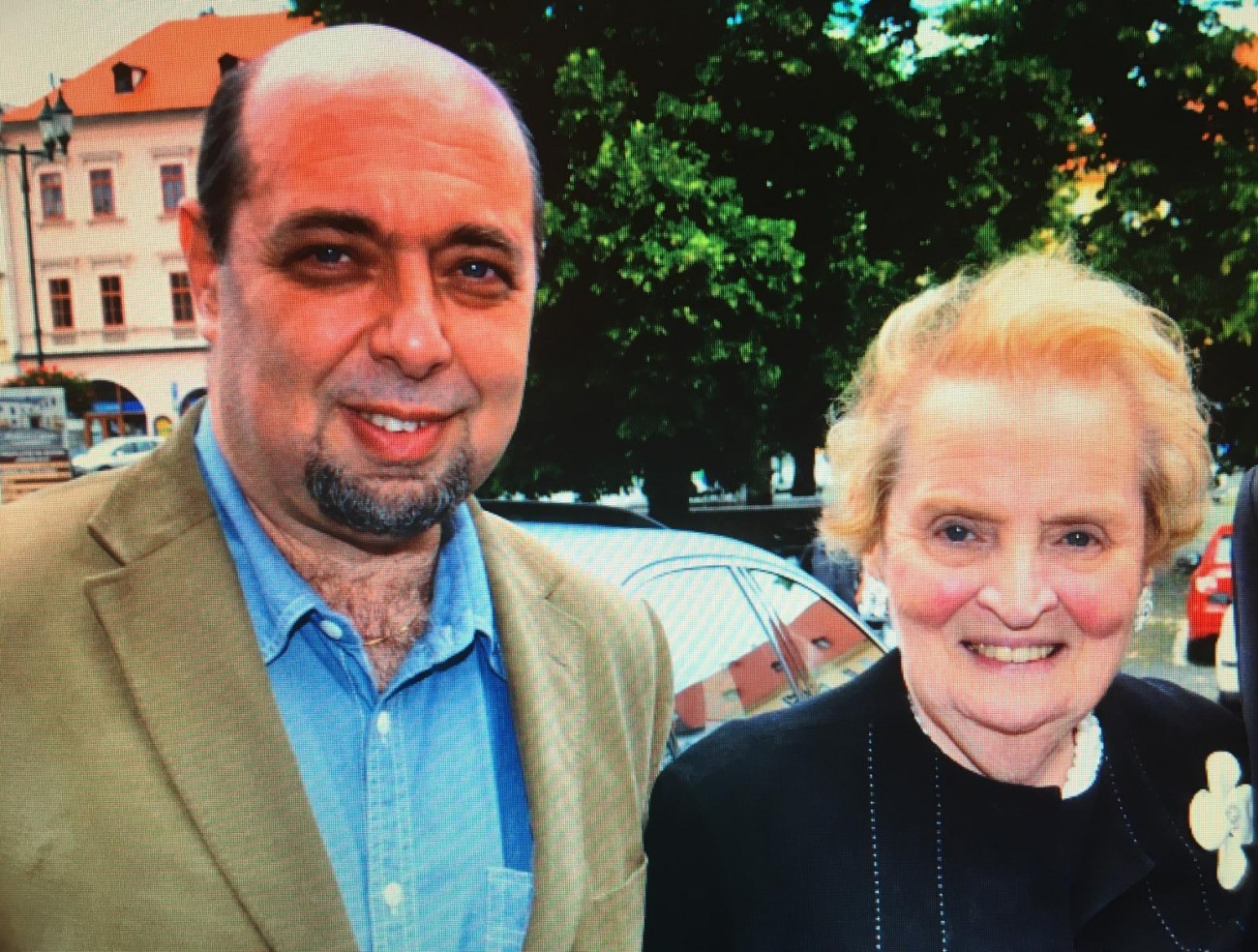 How did it all begin? We have to go back to the 1990s, today they are sometimes called – following the example of the 1960s – golden. At that time, however, we did not realize what was happening, we simply lived a period of euphoria. After decades of communist dictatorship, when it was almost impossible to go to the Adriatic coast for vacation, the whole world opened up to us overnight, including Israel and the United States, which had always been portrayed by the regime as the embodiment of evil. Not only that – we immediately found a lot of friends and colleagues in these “promised lands”.

One of them was also Mark Talisman, a man whose fate would make a bestseller. He was a close friend of Dezider Galský, whom the Communists – by mistake which they later regretted – appointed as chairman of the then Council of Jewish Religious Communities. The two then managed a hussar trick – in the early 1980s they organized a traveling exhibition in the United States with the collection of the Prague Jewish Museum, the famous “Precious Legacy”. As a result, since then, Mark been an informal expert on Czech Jewish history in Washington circles.

It was sometime in early 1997. Mark called me saying that an important visit would come to Prague, brother and sister, and that I should take care of them. However, their visit should be completely discreet, because they need to find out some important facts here. A lot of people were coming to us at that time, so it wasn’t anything unusual for me. John and Kathy were, at first glance, extremely nice people. They were putting together the family history of their parents who had fled Prague from Hitler. Their parents, the Korbels, reportedly spoke Czech together in their new home in America, so both siblings still knew some Czech, but they didn’t dare use it, so we preferred to talk in English. Gradually, we started to put together what it was all about.

It was mainly about their sister. Madeleine was already a prominent figure on the American political scene at the time. Her career is well known, so let’s just mention that – after a successful diplomatic career – she became the U.S. Ambassador to the United Nations. She was doing so well that Bill Clinton, after becoming the American president in his second term, asked her to take on the office of the Secretary of State. And here was a minor snag. One of the key areas of American foreign policy was to achieve peace in the Middle East. Although the United States has always been Israel’s most important ally, American diplomacy sought to engage in dialogue with both sides of the Israeli-Palestinian conflict. But suddenly a woman with Jewish roots becomes foreign minister. Can she be objective?

Madeleine stated several times that her family had never mentioned the fact of being Jewish and therefore she never knew anything about her roots. Her parents told her that her grandparents had died during the war in Bohemia, but nothing else. However, this claim was immediately challenged, not only by Jewish circles. In addition, several publications dealing with this topic were published at the time, most notably Michael Dobbs’ detailed monograph “Madeleine Albright”, subtitled “A Twentieth-Century Odyssey.”

So, John, Kathy and I started to verify all the historical facts. We found out that three of their grandparents actually perished in the Holocaust. Did that mean that the fourth was not Jewish? No, it turned out that Grandfather Spiegel had died before the war and was buried in the Jewish cemetery in Žamberk. The whole family came from Eastern Bohemia and their ancestors greatly contributed to the development of the region. The Körbels had a thriving match manufacture that provided living for many local people, some witnesses still remembered it respectfully. We found that out because we went to those places. With John we visited Letohrad (its prewar part was called Kyšperk), Kostelec and Orlicí, Poděbrady, and other places.

Today this is history. Madeleine, thanks to our research and this fact-finding mission, was able to say that she was only now learning about the tragedy of the Holocaust, which had also affected her family. That also was the first time we met. It was in the residence of the Prague American Embassy, ​​where she was staying. I arrived there to arrange a program for her visit. Of course, she wanted to see our Jewish sites and then go to Terezin, the former German Nazi concentration camp. Almost none of this happened, because the tragic car accident in which Princess Diana had died the day before, and it looked like Madeleine would have to go to the funeral. But in the end she stayed in Prague. She made her statement – which we had put together word for word – symbolically in front of the entrance to the Jewish Town Hall in Maiselova Street, in front of cameras literally from all over the world.

It may be a bit of a cliché, but – like with her siblings John and Kathy – from our very first meeting there was chemistry between us, as if we had known each other for years. As she told me later, she was expecting a rather hostile bureaucrat from an official Jewish organization who would be quite skeptical about her story. Instead the opposite was true because I immediately understood that I had in front of me someone who came from exactly the same background as my parents. The prewar Prague Jewish community had its specifics. Yiddish was never spoken here, if some other language, then German, synagogues were attended only on High Holidays and many Jews celebrated Christmas. That was one of the episodes when Madeleine explained to me that she couldn’t know she was Jewish when they had a Christmas tree at home. I explained to her that we had one also, often next to the Hanukkah candelabrum. That made her laugh.

Our friendship lasted for twenty-five years. We did a lot together. We always discussed the political situation in our country and in the world, but we also focused on the memory of her relatives. We placed a memorial plaque with their names in the Terezin columbarium. There were almost fifty of them. Every time Madeleine was in Prague, we met, at least for a while, to talk about what’s new in our families. International conferences and other projects often brought me to Washington and there – if she was not travelling – we also met, together with her siblings and their families. In a way they adopted me, I was their Prague family.

Today, after Madeleine has passed away, we see and hear praises of her political career, strong views, her role in the NATO enlargement and who knows what else. But I will miss her as a human being, as a friend, as a member of an extended family that neither I nor she ever had because of the Holocaust.